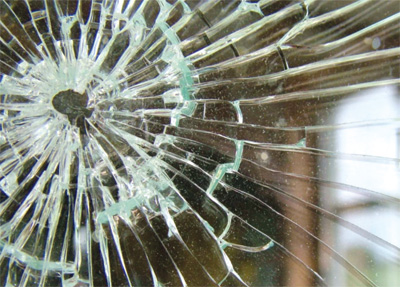 Safety & Security Window Film will help to protect your family and your home. Broken glass caused by accidents can be more harmful then the ball that broke the window. Our Safety Film can hold glass together if broken, preventing harmful shards of glass from being scattered around your house. Our Security Film slows and can even prevents break-ins. Our Enhanced Security Film provides even more protection against break-ins, and helps protect from violent weather, such as hurricanes.

How Does Safety Film Work?

The primary function of safety window film is to hold glass together when it breaks. The chances of injury to people or property is high whenever glass breaks. The application of safety film to existing glass is proven to reduce the risk of property damage and personal injury.

Anyone who wants to protect themselves from injury due to flying glass shards will invest in safety film. Acts of terrorism, vandalism, smash-and-grab burglaries and natural disasters can cause dangerous glass breakage. Often multi-national companies and government institutions will purchase safety film. BP made it a policy some years ago to install safety film in their office blocks and gas stations around the world. IBM applied safety film to their buildings some years ago.

One of the major causes of injury is human-to-glass impact. For this reason, there is existing legislation that covers the use of safety materials in certain building constructions. This legislation is designed to protect individuals from bodily harm should they walk into or through a pane of glass. The major cause of injury to the human body when impacting a pane of glass is what is known as the “guillotine effect.” This is where the person walks into or through a pane of glass with great speed. By the time the individual realizes that they have walked into the glass, it has already broken and they don’t have time to back-track. As soon as the glass breaks, it falls and injures the person.

Safety film decreases the chance of injury from this type of human impact. While the glass may be broken or cracked, it remains adhered to the film – often still intact in its frame. The film’s durability, elasticity, and high resistance to tear virtually eliminates the likelihood of a person walking through the glass.

This product can be fitted to residential glass doors, particularly in areas where children are present. It may also be fitted in other risk areas, such as sliding doors leading to swimming pools. Water glare and the presence of slippery surfaces around a pool can make a dangerous combination.

Many windows are broken either intentionally or unintentionally by thrown objects. Whether a child throws a baseball through a window, or there’s a smash and grab robbery attempt, it’s the same outcome. An object hits the glass with some force, breaking the glass inward. This causes large dagger-like shards to fly into the room. Not only does this risk property, but it also poses a high risk to unsuspecting by-standers. In homes and offices, people tend to place furniture near windows to enjoy the light, warmth, and view. This presents the likelihood of injury in the event of a thrown object.

In the case of retailers, there is a two-fold problem associated with a thrown object. First of all, the resultant glass shards can damage the merchandise on display. Secondly, because the glass generally breaks and collapses, it gives the robber an opportunity to quickly reach into the window and remove something. The application of safety film to these windows will reduce, if not completely eliminate, the risk of theft and damage to property. To best prevent a break-in, installing thicker, stronger security film is recommended.

This polyester film has a high degree of elasticity, making it resistant to breakage. The type of object thrown will determine the chance of it penetrating both film and glass. In most documented cases, the pane of glass itself remains intact in the frame with only a small hole where the object penetrated. This sustained protection serves to stop the would-be smash and grab burglar. Should the robber persist in the attempt to gain entry, repeated efforts will have to be made. The resultant time delay and noise factor is usually enough to scare off most would-be robbers, making an investment in security film well worth it.

An explosion creates a shock wave, or “over pressure.” When the shock wave hits the glass, it causes it to break. These shock waves can cause serious property damage, and even fatalities. Security Window Film minimizes this destruction, which is why U.S. Homeland Security uses safety & security film for their offices.

Since the film has the ability to stretch without tearing, it can absorb a large degree of the shock wave. In many cases, the shock wave is great enough to break the glass, but not enough to shear the safety film. This results in the glass being broken, yet held intact by the film. In these cases, not only are there no injuries, but there is no damage to property inside the building. In other cases, the shock wave is strong enough to break the glass and shear the film. The glass collapses still attached to the safety film with minimal damage, and virtually no injuries. Usually about 95% of the glass remains affixed to the film.

The initial shock wave itself creates a vacuum. This causes a rush of air back to the origin of the explosion. The glass will then be pulled back towards the direction of the shock wave. This is a major cause of concern. In the event of a skyscraper or multi-story building, the implosion force may pull the window from its frame. The resulting implosion sucks glass into the street below instead of the interior of the building. This causes a rain of glass shards. If this occurs in a crowded city center, the injuries to people in the street could be much greater than to the few in the building. With safety film, a large percentage of the window remains intact, with most of glass shards adhering to the film.

Weather and geographic conditions can result in a variety of natural catastrophes. The most prominent of these are hurricanes. Hurricanes produce intense winds which create pressures great enough to break glass. Hurricanes sustain these winds over several hours. This continuous buffeting of the glass often causes breakage. The resulting damage is intensified by the addition of flying debris.

Another important consideration in the case of hurricanes is that the windows often form one of the weakest points of a building’s envelope. In the case of houses, the wind gets through the windows and into the structure. Pressure accumulates, resulting in the roof being blown off the house. This was particularly evident with Hurricane Andrew, in August of 1992. In fact, Dade County of Florida changed the building codes so that windows may be more adequately protected.

Safety film offers a high degree of protection in the case of such sustained winds. Should the winds get to the point that the glass can no longer hold the pressure, in many cases, the glass will break and the film will shear to some degree. The film and glass will often remain intact in the frame, preventing wind and rain from entering the building. At a minimum, it will prevent flying glass shards. This alone helps protect your home during mild hurricanes.

The stresses caused by earthquakes are somewhat different from hurricanes. They are related to twisting or mechanical flexing of the glass. The intensity of the earthquake will largely determine whether the glass breaks. Other contributing factors are the design and method of construction of the building. In the case of earthquakes of significant magnitude, thousands of panes of glass can be broken. In the Whittier, California earthquake of the late 1980’s, more than 110,000 panes of glass were broken. Because there is no implosion factor involved, this does not generally pose as great a threat as a large explosion. Yet, there is still a distinct possibility that a large portion of these panes of falling glass will result in substantial injury. Safety film will help hold the glass together in the event of breaking and can hold the glass into the frame to prevent further damage.